My season – Part one. The First Half

Posted on November 8, 2014 by Tanya Griffiths

I apologise that this is a long one. It’s been such a long time since I last blogged, that I have so much to say. Despite cutting a large chunk out, it’s so hefty that I’ve split it up into two.

I guess this is something that most athletes go through when they are starting out in their sporting career and I’m sure that I’ve been warned about this many times, but I guess I didn’t really listen. I started my second season of racing with certain expectations, with all the highs of last year, I wanted more and I expected better. But sport doesn’t always work that way.

Firstly, the beginning of my season was hampered by cramp. It had happened in plenty of races last year, but this year, it was happening in almost every race. Whenever I would mention it to anyone, I was always met with one of two replies. Either “you shouldn’t be getting cramp” (yeah, really helpful) or “it’s lack of preparation, you haven’t gone hard enough in training”. Well, I’m not entirely convinced that’s the case for me.

So, not knowing the cause and how to prevent it, I was going into races just hoping for the best. The problem was, it wasn’t just cramp that you could push through. At best, so long as I could keep my legs spinning and not push hard (I mean riding at about 10mph), I could finish. At worst, it was so debilitating I would have to get off my bike (sometimes falling into a handy verge due to being unable to unclip). It’s devastating when you’ve worked so hard in a race, only to watch riders go past you one by one when you get cramp, knowing each one is a drop further down the results. And then I discovered a miracle cure.

It was suggested to me and I gave it a go. By drinking a small glass of tonic water each day in the 5 days leading up to a race, I found that I suddenly didn’t get cramp at all. It didn’t solve the prevention issue, but definitely provided me with the cure that I was looking for. If you suffer from cramp, there are health warnings associated with drinking tonic water (the quinine it contains), so please read up on this before you take the decision to follow suit.

Having temporarily solved the cramp issue, I was ready to go head-long back into racing again. But this time, without the cramp as an excuse, I still wasn’t meeting my expectations. After all of the hard work over winter, I felt like I was somehow letting myself down. Lack of achievement after so much commitment is difficult to deal with. After-all, hard work works, right?

One of my first races was my local race (Ipswich BC Road Race) and being my local race, I was desperate to win it. I didn’t race the most tactical race (actually, I don’t think any of us did) and I ended up going for the sprint too early. This is a little bit stupid of me, being a local race that I wanted to win, I should have gone out and recced the finish so that I knew exactly when I wanted to start my sprint. But I didn’t. Eitherway, I still managed a 3rd place. That doesn’t sound too bad, but when you want a win so badly, it’s really hard to deal with that failure. 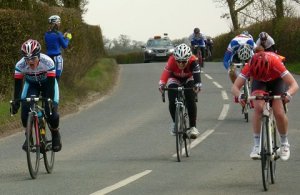 This is one of the cruelties elements of sport. In order to win a hard race, there are moments in that race when winning has to mean everything, nothing else is conceivable. In order to utilise those far reaches of your ability, the ones that drive you to meet pain and beat it, to push ourselves into resources we didn’t know we had. If you don’t care enough for that win, you will let pain win. So, you go through all of that and then you don’t win. What are you supposed to do now? Winning meant everything to you, how can you stop the failure of it from crushing you, destroying your confidence and making you feel like you’ve had enough of this sport? (Not that I actually pushed this hard in that particular race) This must be even harder to deal with when it’s a race you’ve trained for and focused on for years. But then to me, it isn’t about a win now, it’s about the possibility of a win next week, next year, in ten years. It’s really important to learn as many lessons as you can from wherever you can. Look back over the race, what did you do wrong, what did you do right, what did the winner do differently that meant that they won and you didn’t?

I realise now, that my mistake here wasn’t made during the race, it was made in my pre-race goal setting. I shouldn’t have put all my focus on winning the race, but done as my coach tells me to do and set myself little goals and targets within the race. And yes, my coach has tried to hammer it into me, but this went out of my head because I was only concerned with the home win.

Next up, one of my main focuses for the season was the Matrix Fitness Grand Prix (Tour Series). Having looked forward all year to the Tour Series, which were the highlight of my season last year, what happened was a bitter disappointment. I struggled my way through it with a series of frustrating and demoralising races, where I was hoping for some top tens to improve on my best 15th place last year, this year I couldn’t even manage a top 20. In my head, my road racing didn’t seem to be going much better. When I look back now to the first national series race, Tour of the Reservoir, was actually my best result to-date, taking into consideration the quality of the course and the field. I came 23rdon a hilly course that didn’t suit me, and I got cramp with 2 laps to go, which cost me a number of places. Difficult to look at it like that at the time though.

I have made some major changes to my racing this year, one being that I have taken on a coach and the other, that I have joined a team. It’s understandable that I have had expectations this year, to have improved nicely from last year.

One of the great things about racing in a team is contributing to the team’s successes, but there is also a down side. Knowing that you can’t help a team mate who’s trying to win a race, no matter what you try, can feel worse than having a bad result yourself.

My season just seemed to be dragging by in a series of mediocre results and my confidence and joy of racing was plummeting rapidly. This is obviously cyclical, the worse I felt, the worse I did. I started each race, not necessarily thinking negatively, but I was never confident that I was going to do well.

The thing is, I knew that I had it in me, I just didn’t believe it when it mattered. It doesn’t really make sense, but I didn’t have the self-confidence to “pull it out of the bag”.

The source of the majority of my poor performances stems from my expectations. Although not unrealistic, I had given myself goals that were not SMART (check this link out if you are goal setting and haven’t come across this term before http://www.topachievement.com/smart.html). I knew I should not have a goal based on positioning, because you cannot control what other people do, but I have grown up comparing myself and basing my idea of achievement on what those around me have achieved and I find it very hard not to judge myself like this. Don’t get me wrong, I do have goals for races that aren’t position focussed – moving through the bunch, an attack, not riding at the back of the bunch, improving my cornering etc… but I never feel a sense of achievement when I meet these goals, I almost feel like I should be doing this anyway. Typical me, lack of patience, I want everything now!

Up until this point, things hadn’t gone the way I had hoped, but I have only myself to blame.
Thankfully, I didn’t wait for the end of the season to fizzle out before I addressed it. I really need to be in a positive frame of mind to take me through the dark, cold rides of winter. Thankfully, I have a coach who can see things from a different angle. I corrected my mindset, my season picked up and I’ve now got some real highs to motivate me.

So what happened in the 2nd half of the season? Next blog post coming soon.